Bad Math Is Steering Us Toward Climate Catastrophe

It's time to call out the most dangerous assumption in the history of economics.

This is how average temperatures will change in a world with 4 degrees Celsius of warming. Credit: IPCC WGI Interactive Atlas [interactive-atlas.ipcc.ch]

The dangers of climate change have been examined so thoroughly, for so long, that they should be obvious to all. Thirty-four years ago, NASA’s James Hansen prominently warned Congress that the greenhouse effect was “changing our climate now.” Since then, climate models have steadily improved and their details have grown only more alarming. Our current trajectory of carbon emissions already guarantees more flooding, droughts, and intense heat waves along with increased risk of food supply disruptions and novel infectious diseases. The situation is so dire that 11,258 scientists from 153 countries signed a “declaration of a climate emergency.”

Yet global leaders mostly continue to treat climate change as just another policy issue, akin to the latest spike in inflation or debate over the deficit. There are many obvious political motivations for this head-in-the-sand attitude. What is not so obvious is that one of the most pernicious enablers comes from within academia.

Even as climate researchers sound the alarm, leading economists have issued their own forecasts that make our situation look far less dire than it is. These economic projections are built on flawed mathematical models and a deeply misleading approach to data analysis, but they have proved devastatingly influential. Faced with two types of predictions, physics versus economics, policymakers have unsurprisingly chosen the one that justifies an easier, urgency-denying path. The challenge for us all—citizens, leaders, and academics alike—is to call out the mathematical, logical, and moral errors built into the economic forecasts before it’s too late.

It may seem hard to believe that such simplistic modeling guides decisions that could determine the fate of the world.

To see how high up these problems go, consider the work of Yale economist William Nordhaus, who shared a 2018 Nobel economics prize for his analyses of the economic effects of climate change. And what does his award-winning analysis show? Nordhaus’s lecture presentation indicated that a 4-degree Celsius average temperature rise would be optimal, in the sense that the financial costs of holding climate change below that level would exceed the economic losses caused by a hotter world. Richard Tol of the University of Sussex summarized the economic consensus: “Climate change will likely have a limited impact on the economy and human welfare in the twenty-first century.”

For a reality check, climate researchers project that even a 2-degree rise runs a serious risk of unleashing a “hothouse Earth” with vast uninhabitable regions and drastically higher sea levels. Does that sound optimal?

The problems with the economic forecasts begin with analysts’ attitude toward the data they use. Keep in mind that “the data” do not necessarily provide a transparent window onto truth; what they offer is often more like a badly lit, blurry snapshot of one sliver of reality. Researchers select which elements to measure, choose the tools for analyzing them, and interpret the significance of the results. Slick graphs and visualizations can hide all kinds of uncertainties and dodgy assumptions embedded in those decisions.

To ensure the reliability of their models, climate scientists use huge global data sets and apply well-established physical laws such as conservation of mass and energy; their modeling calculations take months to execute on the world’s fastest supercomputers. Nordhaus and his colleagues, in contrast, rely on sparse, questionable data about economic activity and idealized, purely statistical relationships, producing models small enough to run on a desktop spreadsheet.

This is where the second, crucial problem kicks in. At the heart of Nordhaus-style models is a technique known as curve fitting. Practically speaking, it means little more than drawing a nice-looking line through the data. Using this theory-free way of describing data, Nordhaus cooks up a formula intended to show how economic activity varies in response to changes in temperature. What he’s really doing is cooking the books.

It may seem hard to believe that such simplistic modeling guides decisions that could determine the fate of the world, so let’s walk through a real example. The figure below is a re-creation of Nordhaus’s curve-fitting calculation, taken from a paper titled “The Appallingly Bad Neoclassical Economics of Climate Change.” It was authored by Australian economist Steve Keen, a prominent critic of mainstream economics. The red dots in the figure represent economic activity per capita for each U.S. state. The horizontal axis represents each state’s average temperatures compared with the national average temperature. 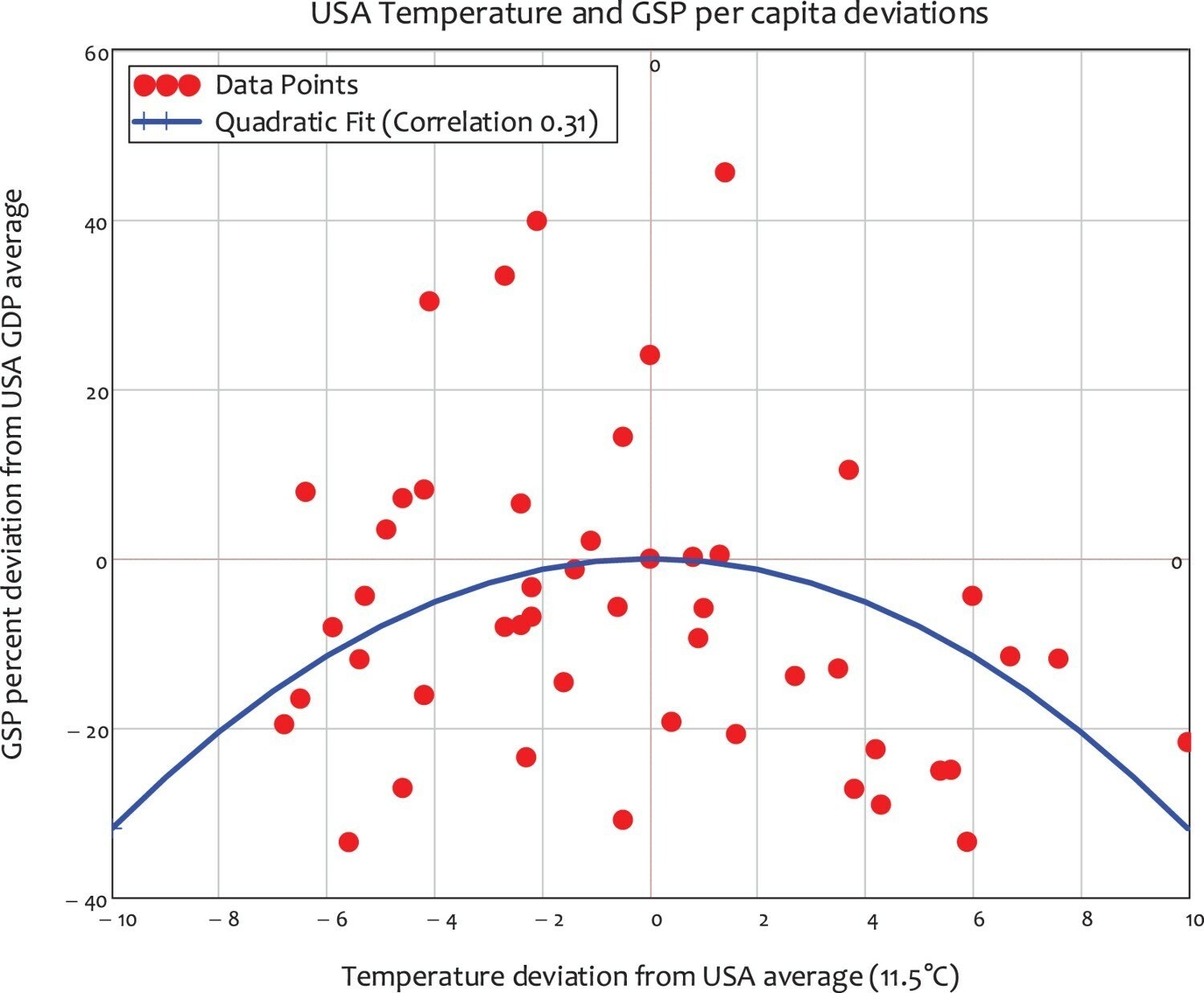 The blue curve is supposed to fit as closely as possible to all of the data points. As you can see, it actually fits the data quite poorly, but it does yield an equation that you can plug numbers into. Such dodgy data modeling justified Nordhaus’s early assertions that the economic impact of climate change would be modest. Since then, he has revised his formula to show even smaller economic losses due to climate change. His latest version projects that economic activity falls by 0.227 percent for every 1 ºC of temperature change squared. In this reassuring analysis, if the average temperature of the planet were to rise by 4 ºC, the global economy would shrink by a mere (0.227 x 4 x 4), or 3.6 percent.

To the uninitiated, the results look precise and impartial. Things collapse the moment you drill into the thinking behind the curve fitting, however. For starters, Nordhaus excludes roughly 90 percent of all economic activity from his model, presumably because it occurs indoors—as if floods or blackouts have no effect on indoor commercial work. The strange assumptions keep coming. Why would the economic differences between Alaska and Florida under today’s conditions be a useful guide to what their economies will look like when Alaska is baked by climate change and much of Florida is flooded? How can you assume that the myriad other factors affecting the economy will be essentially the same in the year 2100 as they are today? It’s like using current bottled-water sales trends in the United States to project global water markets in a future Mad Max world.

Mathematician Cathy O’Neil has criticized curve-fitting models for generating “spectacularly stupid projections” based on the faulty assumption that the future will be like the past. She points in particular to a Trump White House economist who reportedly used curve fitting to predict that COVID-19 deaths in the United States would fall to zero by May 15, 2020. What the curve fitters tend to overlook is that many different lines can be fit to the same messy data, making it possible to generate widely divergent projections. Keen describes Nordhaus’s curve fitting as “the most unrealistic and dangerous ‘simplifying assumption’ in the history of economics.”

In the “user’s manual” for his model, Nordhaus notes that his work omits hard-to-model costs, including biodiversity loss, sea level rise, and political changes. His unhelpful remedy is to pile even more uncertainty on. To account for the enormous unknowns, he makes an “adjustment” allowing for an extra 25 percent of economic damages—a number seemingly plucked out of thin air. Even more alarming, he ignores the sudden shifts and tipping points seen in many climate models, which could have economic consequences lying far outside his curve. Global leaders have used economic models to guide policies that will burden all of us and our descendants for generations to come, without understanding the weakness of those models’ methods and assumptions.

A pivotal moment in this magical economic thinking came in 1983, when the National Academy of Sciences issued a major report on climate change. Its authors broke into two distinct camps. “Physical scientists viewed accumulating CO2 as a serious problem,” writes science historian Naomi Oreskes, but “the economists argued that it wasn’t.” Representing the economics side, Nordhaus opposed immediate climate action, maintaining that mitigation or adaptation to a high-CO2 world would be “more economical.”

William Nierenberg, the physicist who chaired the report committee, sided with Nordhaus and amplified his perspective in the executive summary, effectively giving the economists both the first and last word. The report was then used by the Reagan administration to overrule an analysis by the Environmental Protection Agency that recommended immediate cuts to coal use. Nierenberg went on to found the George C. Marshall Institute, a think tank funded by the fossil fuel industry that proved influential in killing substantive climate legislation in the United States. Economic models trivializing the climate crisis have continued to hold sway ever since. A 2021 review paper by an international team of climate researchers identified Nordhaus’s models as putting us at “serious risk of extreme and irreversible changes to the conditions for life on Earth.”

By framing climate change in terms of economics, Nordhaus and his allies are also promoting a dehumanized view of extremely human issues. Any analysis that uses cash as the universal yardstick for social value will systemically under-weigh the rights of the poor. Such economic models afford 265 unemployed people in Burundi roughly the same “value” as one unemployed American. Yet the poorest half of humanity is responsible for just 10 percent of global carbon emissions. In contrast, the richest 1 percent (those who earn more than $109,000 a year) generate 15 percent.

The world needs climate policies built around physical realism and human needs, not around economic models that hide their justice-hindering biases. Clearly, we can’t rely on academic peer review to weed out these models; nor can we count on the journalists and pundits who have routinely promoted them without performing due diligence. Fortunately, more economists are joining Keen in calling out Nordhaus’s deceptive forecasts. Lord Nicholas Stern of the London School of Economics writes that it is “irresponsible to act as if the economic models currently dominating policy analysis represent a sensible central case.” New York University economist Gernot Wagner echoes the climate scientists, arguing that “economics needs a climate revolution.” Even Paul Romer, who shared the Nobel with Nordhaus and served as chief economist at the World Bank, has endorsed a broader view that “the economists at the helm are doing more harm than good.”

Perhaps the quickest argument against blindly trusting the economic models is that they have a terrible track record. Very few economists foresaw the 2008 financial crash; most of them deemed such a crash impossible. A post-mortem report traced this failure to “the profession’s insistence on constructing models that, by design, disregard the key elements driving outcomes in real world markets.” Those models didn’t even include a banking sector, the source of the crash. On the other hand, the physical drivers of climate change have been understood, with ever-increasing precision, since they were first described by the American scientist and inventor Eunice Foote in 1856. 1856!

It’s clear which experts deserve our trust. Let’s do all we can to ignore the curve-fitting distractions and work to minimize the harm our carbon-intensive lives are causing.

is an entrepreneur and writer with a background in technology and computational modeling.